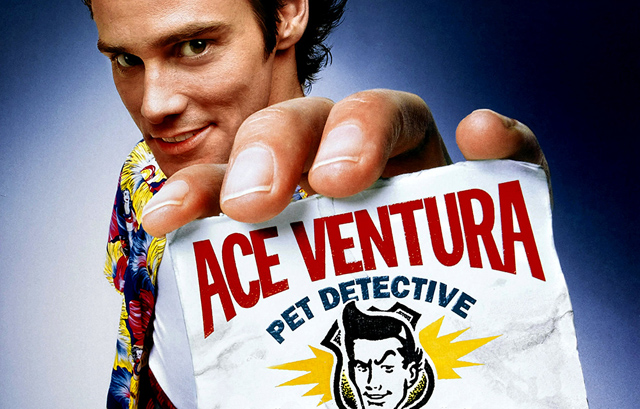 Ace Ventura: Pet Detective takes place in Miami, Florida. The story focuses on a wacky pet detective named Ace Ventura. He finds and reunites lost pets with their owners. Two weeks before the Miami Dolphins are to play in the Super Bowl, their dolphin mascot Snowflake is stolen. The Head of Operations Roger Podacter and Chief Publicist Melissa Robinson are told to find Snowflake by Super Bowl Sunday or find new jobs. Melissa decides to call on the services of Ace Ventura. While inspecting the tank, Ace finds a small amber stone in the filter. He concludes that it is from a ring. After clearing local billionaire and fish collector Ronald Kamp, the pet detective discovers that the stone is, in fact, from the 1984 AFC Championship ring. Ace hunts down and clears seemingly everyone who was a part of that team and finds himself at a deadend until he and Melissa learn that Roger Podacter has died of an apparent suicide attempt. The two of them go to visit the crime scene and the pet detective proves that Podacter was actually murdered. He and Melissa head to the stadium to check out the rings’ receipts. While in the office, Ace discovers a team photo from 1984 that is different from the one he had been using to track the other players and coaches. He notices the kicker Ray Finkle. Melissa informs him that it was Finkle who missed the field goal that would have won the Super Bowl for the Dolphins that year. The following day Ace heads down to the kicker’s hometown in Collier County where he finds his parents. The kicker’s senile mother shows him the clip of the missed field goal and the pet detective discovers that quarterback Dan Marino was the holder on that kick. Ray Finkle blames Marino for the missed kick and what happened to him afterwards. Ace immediately calls Melissa and warns her that Dan Marino may soon join Snowflake.

When I first saw this film, I noticed a parallel between it and what happened in Super Bowl XXV when kicker Scott Norwood missed the final field goal that would have won the Super Bowl for the Buffalo Bills over the New York Giants. Like Norwood, Finkle’s kick missed wide right. I soon discovered that the film was, in fact, loosely based on what happened in that game. Of course, there are a few differences. For instance, the clip of the miss said it was from Super Bowl XVII. In the real Super Bowl XVII, the Miami Dolphins did actually lose the game but it was against the Washington Redskins and not the San Francisco 49ers, as the film indicates. The final score shows the game was decided by 10 points, 27-17, and not by one point.

Ace Ventura: Pet Detective was the film that really got Jim Carrey’s acting career going. Film viewers got a taste of his comedic acting style. Jim Carrey was seen as someone who was not afraid to make a complete fool out of himself in order to get some laughs. Scenes like the one where he bends over and talks from his rear and his phrase “Alrighty, then!” became synonymous with him. Similar films, like Dumb & Dumber and The Mask, helped Carrey win the 1994 MTV Award for Best Comedic Performance.