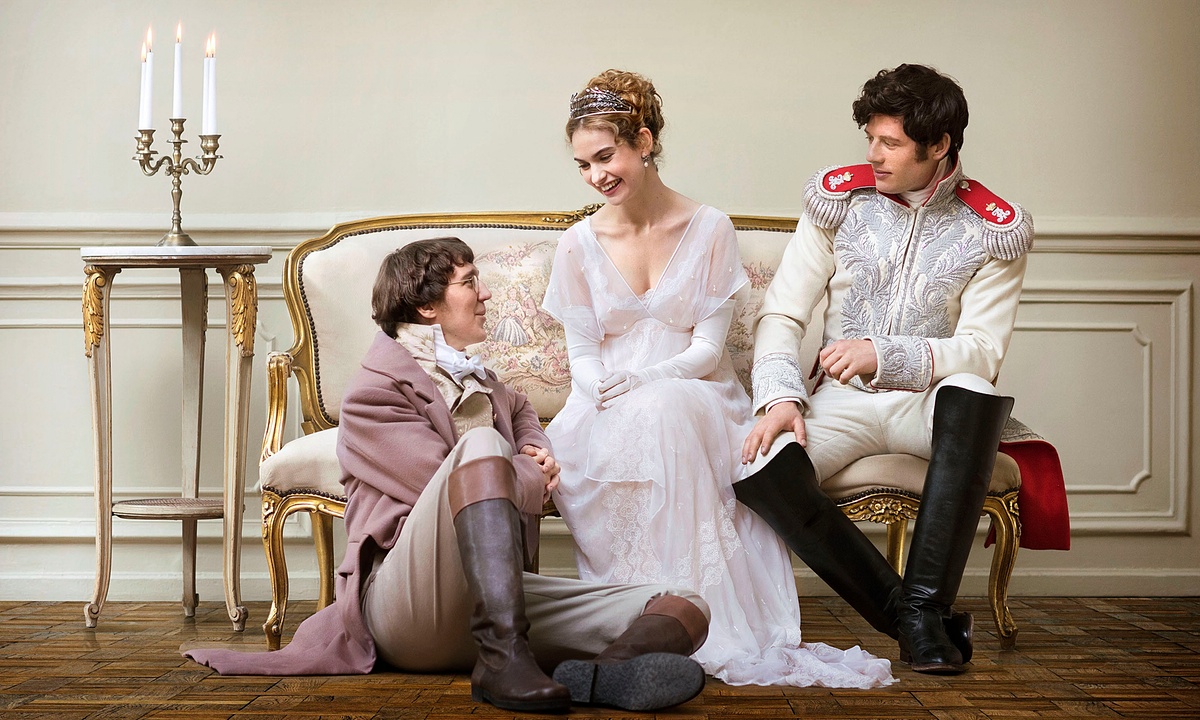 Starring Paul Dano (the young Brian Wilson in “Love & Mercy”), Lily James (Lady Rose on “Downton Abbey”) and James Norton (“Grantchester”), with lively older-generation contributions from Gillian Anderson, Stephen Rea, Jim Broadbent, Ken Stott and Rebecca Front, the big, fancy BBC co-production will show domestically and simultaneously beginning Monday on A&E, Lifetime and the History Channel. For the History people there are big battle scenes, Bonaparte and the czar; for the Lifetime people there are women and the men who love or don’t love or merely press themselves upon them. (This is Tolstoy rendered smoking hot, when the opportunity arises.) And for the A&E people, well, who are they exactly?

Even with the reduced list of players, it’s the sort of thing perhaps best watched with someone you can turn to and ask, “Now who is that again?” Being a very, very long book and heavily populated book — a 1972 television adaptation wit hAnthony Hopkins took 20 episodes to tell the story — it has obviously been streamlined, even at six hours. (It will last eight hours here, over four nights, once the commercials are in.) It clips along in leaps and bounds, and the speed at which events occur can make them seem dramatically obvious, more declared than developed. Much of the time you don’t feel the characters’ pain so much as take it as read. But the key moments of spiritual revelation are handled well and the production gains power in the home stretch, just where you want power gained.

With its empire-waist gowns and scenes set in parlors and ballrooms and soldiers of better and worse moral quality coming and going and advantageous and disadvantageous matches being discussed and made, the miniseries plays much of the time like a Slavic version of Jane Austen (who was writing in the years when “War & Peace” is set), with more violence and less humorous irony. (“War and Peace” adapter Andrew Davies, at 79 still Britain’s go-to guy for 19th century literary adaptations, wrote the much-beloved Jennifer Ehle-Colin Firth version of “Pride and Prejudice.”) And though the fate of Russia is still very much on the characters’ minds, the main business in this version is personal and largely romantic — who ends up with whom in the end and who even makes it to the end.

It is 1805. Pierre (Dano) is a young man with new ideas and an inchoate desire to do good in the world whose life is derailed when he falls heir to a fortune and a title, the self-serving bad advice that comes with them; and though he’s looking for a girl who wants to talk “politics, ideas, the war, how to live and what life really means,” he winds up with the fortune-hunting Helene (Tuppence Middleton), who wastes no time finding other men to sleep with. It’s a difficult character to play, a self-described “fat, drunken aristocrat who makes a bungle out of everything” — not a part made to light up the screen — and Dano’s natural softness only redoubles Pierre’s.

Pierre’s good-looking best friend, Norton’s Prince Andrei — pretty much everyone here has a title, while with one important exception the lower classes show themselves mostly as a rabble, in cameo appearances — cuts what on the surface seems the more conventionally heroic, capable figure. He’s got a wife and a baby on the way. But he’s dead inside.

Completing the central triangle is Natasha (James), the designated vision of unaffected loveliness; yet she too will err and suffer and come out the better for it. There are many other characters, of course, most of whom will make at least one life-changing or life-not-changing mistake before the end. It’s a drama all around.

Directed by Tom Harper (not yet born the last time the BBC made this story), it’s a suitably lavish production, with some beautiful big set pieces and yards and yards of brocade and tuille. The battle scenes, while typically underpopulated, communicate the noise and madness and the ultimately pointless waste of war. (“Peace is better,” is one hard-to-miss point of the story.) The most unambiguously heroic figure here may be the historical Gen. Mikhail Kutuzov (Brian Cox), wiser and more cautious than the czar and his ministers; to borrow a figure from Kenny Rogers, he knows when to hold them and knows when to fold them.