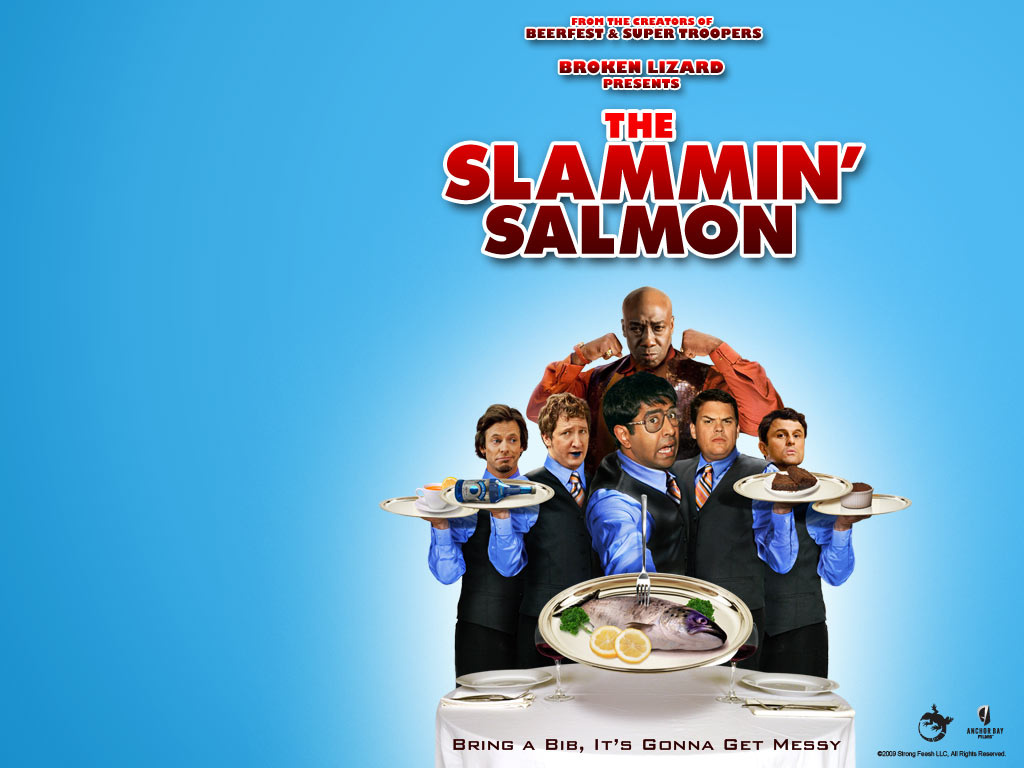 The Slammin’ Salmon is one of the craziest comedy movies you will see all year, absolutely hilarious from beginning to end.

It stars Michael Duncan Clarke (The Big Mile) as Cleon “Slammin'” Salmon also known as “The Champ”, a retired former heavy weight boxing champion, who has opened a restaurant The Slamming Salmon, where customers are waited on by a very competitive crew of waiters.

Rich in his panic conveys to the staff that there will be a prize for the waiter that generates the most cash that night, and competition begins amongst the waiters, Nuts played by the hilarious Jay Chandrasekhar (Beerfest, The Dukes of Hazzard), who normally takes his medication or else he turns into his alter-ego Zongo (and you just know somehow he is going to forget to take his medication), there is an absolute classic scene, where Nuts/Zongo is trying to serve a salmon to one of the customers, but in his mind all the customers at that particular table are cats, he thinks he is lovingly holding the salmon while the cats all feed on it, while he asks “what does it taste like”? But in reality he is forcefully shoving the salmond down the throat of an unfortunate customer.

One of the waiters Connor played by Steve Lemme (Beerfest), used to be the main lead on a TV show CFI Hot Lanta (an obvious parody of CSI: Las Vegas and its spin offs), but he lost his job, and embarrassingly has to go back to waiting tables at The Slamming Salmond, but ofcourse his colleagues especially Guy played by Erik Stolhanske (Beerfest), can’t wait for tidbits on others stars in the show, such as Morgan Fairchild who makes a guest appearance as herself.

Mia played by the gorgeous April Bowlby (Two and a half men), is in ballerina school, and aims to win the prize as the waiter able to bring in the most cash, but she is about to get involved in an accident that might ruin her chances entirely. The chef Dave played by Paul Soter (Beerfest), has got his socially awkward twin brother Donnie (also played by Paul Soter) a job as a waiter, and he is also thrust into the competition, but is soon corrupted by Connor, who equally has eyes on the prize, as well as Tara, played by the gorgeous Cobie Smulders (The L Word), a medical student, who along with trying to fight for the prize, has to prevent Nuts from turning into Zongo, by making sure he takes his medication.

The Slammin’ Salmond has superb acting, with all the cast in the movie having excellent comedy timing especially Michael Duncan Clarke as the ominous boss, and the movie has great cameos, notably from Sendhil Ramamurty (Dr. Suresh in Heroes) as Marlon Spencer who has brought his girlfriend Samara Dubois played by the gorgeous Oliva Munn; to propose to her, but is about to get into a spot of bother with the engagement ring.