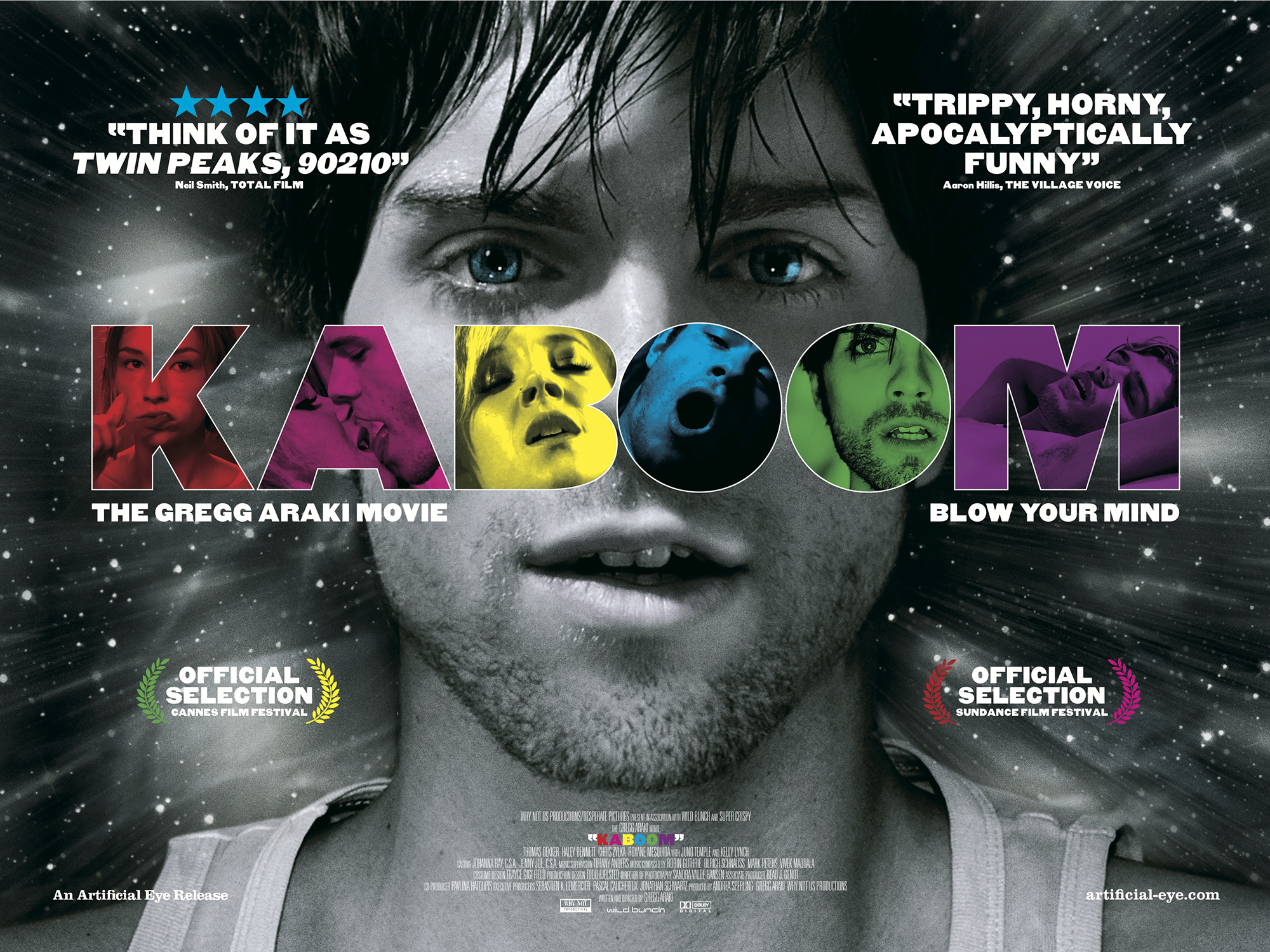 Gregg Araki’s latest feature is supposedly a return to his roots, a manic, campy dark comedy in the vein of his earliest works, such as The Doom Generation (1995) and Nowhere (1997). I have seen neither of those films and can only compare the new one, Kaboom, to Araki’s last two features, the beautifully sad Mysterious Skin (2004) and the underrated stoner comedy Smiley Face (2007). I am rather unhappy to report that Kaboom is nowhere near as great a film as Mysterious Skin and, to me at least, nowhere near as fun as Smiley Face.

Kaboom is the loose, wildly unrestrained story of Smith (Thomas Dekker), an ambi-sexual college freshman who has an unrequited crush on his mindless surfer roommate, Thor (Chris Zylka); meanwhile, Smith’s best friend Stella (Haley Bennett), who he describes as a “vag-etarian,” has the opposite problem with her latest girlfriend, the clingy and apparently supernatural Lorelei (Roxane Mesquida). Smith eventually hooks up with London (Juno Temple), a free-spirited sexual adventurer who picks him up in the bathroom of a house party and is easily the most interesting and charismatic character in the film. Smith also wants to get something going with Oliver (Brennan Mejia), who mysteriously leaves what amounts to a dating service video on Smith’s personal computer in order to intrigue him.

If all of this sounds rather convoluted and dull, rest assured that that is absolutely true. Whereas Mysterious Skin offered perhaps the most insightful look at the effects of child abuse ever committed to film, and Smiley Face managed to make a day in the life of the constantly over-intoxicated Jane (Anna Faris) into an entertaining and frequently hilarious ride, all Kaboom really offers is lots of very attractive people having lots of sex. If that sounds good enough to fill 90 minutes for you, by all means check it out; the people are, without exception, very attractive. Unfortunately, with the lone exception of London (Temple’s performance really is quite good), none of them are very interesting. Dekker does his best to take his character seriously (perhaps too seriously), but he is constantly stymied by Araki’s silly, sloppy script.

Some of the dialogue is simply atrocious, too. I know that the conventions of camp require a certain degree of intentional awfulness, but I just couldn’t bring myself to be amused by the overabundance of unfunny one-liners and creative cursing that mostly just fell flat. The two guys sitting next to me at the screening I attended would undoubtedly disagree; at one point, Smith is wearing a beret and Stella says to him, “Nice hat. Are we in Paris?” Cue the uproarious laughter to my right.

I wanted to like this movie. I really did. One of its main problems, though, is that as soon as it starts to get interesting, it’s almost over. There is a pointedly absurd and nearly incomprehensible conspiracy going on, which Smith becomes aware of after being attacked by a handful of guys wearing animal masks and otherwise dressed like ninjas. This incident spurs him to dig deeper, uncovering a plot that involves his estranged father, as well as pretty much everyone else he knows, including his mother (Kelly Lynch) and the campus guru, The Messiah (James Duval), the two most useless and uninteresting characters in the film.

Early reviews compared this movie to Donnie Darko (2001), which makes some sense due to all the animal masks and the theme of a teenager trying to save the world, but Kaboom is actually a lot more similar to Kelly’s 2006 follow-up, Southland Tales, in its over-the-top disregard for conventional storytelling. Sadly, Kelly’s film managed to consistently entertain me for an hour longer than the mostly boring Kaboom. Araki was supposedly inspired by John Waters to make an old-fashioned “Gregg Araki movie,” but even Waters has the good sense not to spend too much time returning to the well of his early work. Pink Flamingos (1972) began a career that has produced some truly great films, but that doesn’t make it particularly watchable, and Kaboom is really no better.