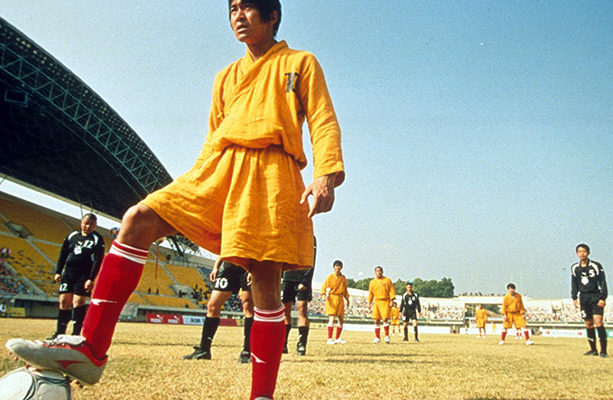 Shaolin soccer with lead star Stephen Chow’s as Sing is one of my favorite Chinese movies. It was rated as one of the highest-grossing of Hong Kong movie. It’s a funny action movie that is makes audience believe that action is real. Artistically they delivered the fantasy of the movie with the combination of art of shaolin and soccer game.

Shaolin Soccer evolves to six people having different knowledge in shaolin. One day, Sing was discovered by Fung, a former soccer star with bad history in playing soccer. Fung is the “Golden Leg” of his time. He saw the potential of Sing and believe that one day his knowledge in shaolin can be use in playing soccer, eventually become the coach of Shoalin Team. Then Sing convinced his brothers to join for Shaolin team.

One of them has different characteristics. Sing has his “Mighty Steel Leg”, the striker of the team. His elder brother as “Iron Head” because of he can make his head tough like iron. His second brother called as “Hooking Leg”, a Kung Fu style of Ground Tumbling boxing. His third brother is the “Iron Shirt”. He can catch the ball by his abdomen and throw it away. His Fourth brother called as “Empty Hand” because of his hands that were so fast like bullets. Finally, the youngest as “Weight Vest”, even though his is fat he can lighten his weight.

Another important character was the female goalie. She is Mui of the movie, love team of Sing. They used their talents to defeat the Team evil. It is an eye opening that Shaolin Kung Fu can help to our daily life.