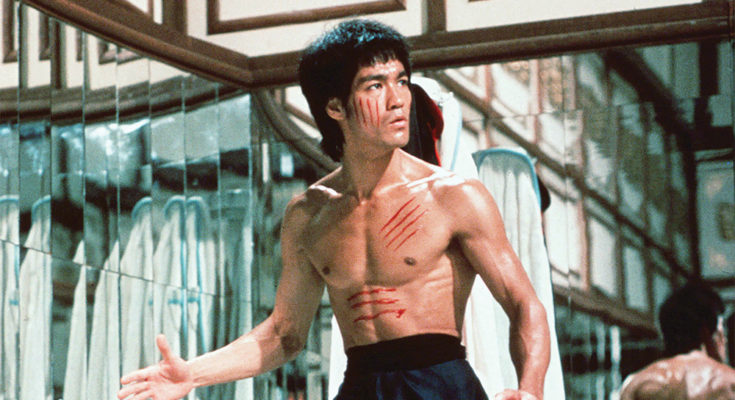 We all know Bruce Lee from some particular fight scenes from his movies. There is the classic scene of Bruce versus Chuck Norris at the Coliseum in Rome in Enter the Dragon. There is the fight scene with a 5’7″ Bruce and the 7’2″ tall Kareem Abdul-Jabbar in “Scenes of Death”. Who can forget the classic ending of Bruce running and jumping at his attackers in the final scene of “THE CHINESE CONNECTION”? With a lot of these classic movie scenes framed in memory, let’s take a walk through Bruce Lee’s movies.

This first movie, “GOLDEN GATE GIRL”, takes us way back to 1941. Bruce was only a couple of months old when this movie was filmed in San Francisco, where Bruce was born. No karate in this film. Entering this early into show business gives us an idea that film making was introduced to Bruce at a young early age.

Bruce’s first starring movie, “THE KID”, was filmed in Hong Kong in 1950, when Bruce was 10 years old. In this film you are starting to see a very personable and involved kid, who played very well for the camera. Bruce Lee’s father was a well known Chinese actor, who also starred in this film. Bruce Lee also worked with his father on a previous film, “THE BIRTH OF MANKIND”, in 1946.

Bruce moved to San Francisco, California in 1959, then moved to Seattle, Washington to complete is high school education. He later attended the University of Washington, where he enrolled in the drama, and also studied philosophy. All through this time, Bruce practiced the Wing Chun Kung Fu he had learned in Hong Kong from Yip Man. Through Bruce’s innovations, he mixed traditional kung fu, boxing, wrestling, and other fighting forms, to create his style of mixed martial arts, he called, Jeet Kune Do.

While expanding his practice and teaching of martial arts in the 1960’s, Bruce never forgot his background in films. This led to several TV roles including, “THE GREEN HORNET” and “BATMAN”, in 1966-1977. Bruce was also in “IRONSIDE” in 1967, “BLONDIE” in 1969, and “HERE COME THE BRIDES” in 1969. In 1971 Bruce also starred in some episodes of “LONGSTREET”. What was unique about his LONGSTREET role is he starred as himself, and taught his form of martial arts and martial arts philosophy. In 1971 Lee pitched a modern kung fu western show to Warner Brothers, which, of course, he was to star in. Unfortunately, Warner Brothers used the concept of a Shaolin priest wandering the cowboy west and awarded the role to David Carradine. At the time, David Carradine had never had any martial arts training. This let Lee know he was limited in what types of movies or roles he could play in the U.S. TV and movie market. In all fairness to Warner Brothers, Lee’s English may have been difficult for some people in the U.S. market to understand.

Bruce’s first movie in the U.S. after the 1941 “GOLDEN GATE GIRL” was “MARLOWE”, starring James Garner, as a somewhat rough characterized private detective. The movie was fairly mediocre, with Bruce playing a Chinese gang member who used karate and tore up James Garner’s office. In one scene James Garner fights Bruce Lee and somehow beats him. This is not a movie Bruce Lee is very well known for.

With Bruce Lee’s movie acting career going nowhere in the U.S., Bruce travels to Hong Kong and finds he is well known from the “GREEN HORNET” TV series. In Hong Kong TV series is known as the “KATO SHOW”. With his popularity in Hong Kong and Asia, Bruce decides to try his hand in the Asian film industry. In 1971 Bruce Lee stars in “THE BIG BOSS”, which is his first Asian Kung Fu/Martial Arts movie. This movie was filmed in Thailand, and became popular in Asia. Frankly, in my opinion this was not a very good movie. The fighting was not that good. The only unique part of the movie I remember was the bad guy throwing a knife at Bruce, which Bruce intercepts with a kick, which strikes the opponent in a killing blow to his body. The movie plot was based on workers in an ice factory being subjugated by the boss, who was also selling drugs. If I had never seen this movie, I would not have missed anything Bruce Lee represents. I’ll give it one star for historical purposes. Note: in the U.S. market this film is also known as “FISTS OF FURY”

The real turning point in Bruce Lee’s movies was “FIST OF FURY” in 1972. Note: in the U.S. this film was known as “THE CHINESE CONNECTION”. This film is an absolute classic. In this film we are seeing more hand to hand fighting and less swords and knives that we saw in “THE BIG BOSS”. This movie is definitive of a new class and genre of martial arts films. The storyline of the movie has Bruce Lee as a student of a kung fu school in the early 1900’s. This was a period of time where Shanghai, in China, had been subjugated by European powers, and more recently by Japan. The Japanese held the power over the local police and treated Chinese like second class citizens. One day two Japanese came by Bruce Lee’s school and left an insulting sign, taunting the Chinese. Bruce Lee incensed at the insult, took the sign back to the Japanese karate school beat everyone up. Things then escalated between the Chinese and Japanese with Bruce Lee essentially beating up all of the Japanese. The final scene has the Japanese and police coming to close the Kung Fu school and arrest Bruce Lee. Bruce Lee resists to the end with a flying kick straight into the guns facing him. There are a number of important points here. You have a country or part of a country which has been subjugated by a foreign power. The locals fight back. It pits the good regular people against the bosses. My school is better than your karate school. The real story line here is that Bruce Lee stood up for something, and stood against bullies. This message resonated with many people in third world countries at the time. This was a fight against oppression. The martial arts in this film were good. The story line made it great. If you are a Bruce Lee fan, this is a must see film.

With two recent martial arts movies completed, and a tremendous response at the box office, Bruce Lee is now a certified movie star Hong Kong and Asia. With this Asian movie success, Bruce Lee is getting more recognition as a film star from Hollywood. Bruce’s next movie is “THE WAY OF THE DRAGON” or “RETURN OF THE DRAGON”. This is the film shot in Rome with the epic scene between Bruce Lee and Chuck Norris. This film was the first movie Bruce wrote, directed, produced, and starred in. This was considered a martial arts action, comedy movie. The movie was fairly mediocre. The fight scene behind the restaurant showed Bruce’s talents with empty hand karate, as well as using a bo staff, and nunchucks. Bruce Lee and Chuck Norris were friends and used to work out together. Bruce asked Chuck if he would like to be in his movie. Chuck asked who was going the win the fight between them. Bruce said, “Me, of course, it’s my movie!” This fight was classic in that it was between two marital artists who respected each other, and vowed to fight to the death. This fight scene really spoke more about the essence of what a martial artist is and represents. This film is what really made Chuck Norris’s film career. Good stuff! I’ll give this movie one star for storyline and three stars for Bruce and Chuck’s epic battle.

Bruce’s next film was “ENTER THE DRAGON” in 1973. This film is significant with production being co-produced by a Hollywood film company, Warner Brothers, along with a Hong Kong company, Golden Harvest. Bruce Lee was a writer, editor, and star of this film. “ENTER THE DRAGON” also featured, John Saxon, Jim Kelly, Robert Wall, Bolo Yueng, and a newcomer, Jackie Chan. Quality and story wise, this was a well produced movie, with good video, action, story line, and characters. According to one source, Bruce Lee wanted to show some to the good parts of martial arts and Chinese culture. The film cost about $850,000 to make, and made around 25 million dollars in the U.S. and 200 dollars million worldwide. This was a well put together film which I give five stars to. Due to Bruce Lee’s death in 1973, this was the last film Bruce Lee made before he died.

“THE GAME OF DEATH” came out in 1978. This is the movie where Bruce Lee fights various martial artists up different levels of a pagoda. The main idea of this film was to showcase Bruce Lee’s Jeet Kune Do techniques and how it is used to adapt to different fighting styles. The most stand out part of this film is Bruce Lee, 5′ 7″ tall fighting Kareem Abdul-Jabbar 7’2″ tall. Talk about extremes. In this case, Bruce found out Kareem’s sensitivity to light, and defeated him. The Pilipino karate master, Dan Inosanto, was one of Bruce Lee’s opponents in this film. Dan was the martial artists who introduced Bruce Lee to nunchucks. After three months, Bruce was better than Dan with nunchucks. Bruce also fought a Japanese karate master using a variety of techniques. I’ll give this film three stars for the nature of the movie and how Jeet Kune Do is showcased. Bruce is probably best known from this movie from this yellow sweat suit.

To recap, Bruce Lee’s first movie role was when he was a couple of months old. He acted in a number of U.S. TV shows and a movie, which showed his talents, but could not achieve stardom and a Chinese man. He rocketed to stardom in Hong Kong martial arts movies, and then finally received the recognition from Hollywood he deserved. More than an actor Bruce Lee re shaped martial arts, karate movies, and became a cultural icon. His popularity today, shows the significance of who he was, and what he gave us. He was truly a man before his time. We are fortunate to be able to see Bruce Lee from his movies.